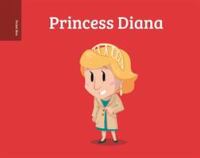 A colorfully illustrated, pocket-size picture book biography of famous British royal, Princess Diana. Princess Diana was the wildly popular first wife of Charles, Prince of Wales. Known as "the People's Princess," she was involved in many charities, including the British Deaf Association, and supported other controversial causes like AIDS and the ban of landmines. From her engagement to Prince Charles, Princess Di had a special connection with the public in England and around the world. Her tumultuous marriage was subject to aggressive media attention, and she was forever memorialized in the hearts of the British people after her death in a tragic car crash in Paris. About the Pocket Bios series: Pocket Bios are full of personality, introducing readers to fascinating figures from history with simple storytelling and cheerful illustrations. Titles include men and women from history, exploration, the sciences, the arts, the ancient world, and more. Want to know more about women in history? Don't miss the Pocket Bios about Cleopatra, Rosa Parks, Anne Frank, Marie Antoinette, Joan of Arc, and Pocahontas.