The escape of Robert Smalls : a daring voyage out of slavery 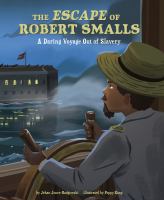 Book
In the midst of the bloody U.S. Civil War, an enslaved man named Robert Smalls carried out a dangerous plan. Smalls secretly took control of a Confederate steamboat, the Planter, and sailed the ship toward a Union fleet. A little known story of courage, hope, and peril during the Civil War, this true account celebrates an unsung American hero.