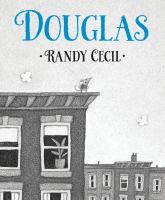 "When Iris Espinosa goes to the cinema, she doesn't expect to meet a small mouse. And she certainly doesn't expect that mouse to stow away in her sweater pocket. At home, Iris is delighted by the mouse's daring, which reminds her of the actor Douglas Fairbanks. And so begin the adventures of a sweet, plucky mouse named Douglas, who must overcome obstacles aplenty, from hungry cats to broom-wielding humans, as she journeys across the tall rooftops of Bloomville to return to her movie-theater home. Full of high-stakes chases, clever escapes, and valiant rescues, Randy Cecil's story is a cinematic and meticulously crafted celebration of courage and friendship. In his follow-up to Lucy, Randy Cecil again tells a visually arresting tale in four acts -- this time about a brave movie-theater mouse on a daring adventure."--provided by publisher.