The boy who invented the Popsicle : the cool science behind Frank Epperson's famous frozen treat 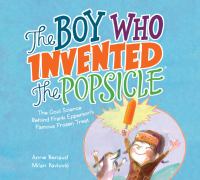 Book
"A curious child who always knew he wanted to be an inventor when he grew up, Frank spent much of his youth experimenting in his basement laboratory -- mixing and measuring, testing and inspecting, studying and scrutinizing. One of his favorite things to experiment with was soda water, and one day after discovering the perfect flavoring for his most recent invention, he left it outside on his back porch with a spoon in it. The next morning, the drink had frozen solid -- he had invented a frozen treat. It wasn't until he was an adult that Frank decided to market his invention. At first, he called it the "Ep-sicle," but with his nine children constantly begging, "Pop, can we have a 'sicle"?" he changed the name to the Popsicle. The science experiments that young Frank performs in the story are interweaved throughout the narrative, so readers can experiment right along with him. At the end of the book are additional historical notes about Frank and his invention, along with photos and a bibliography."--