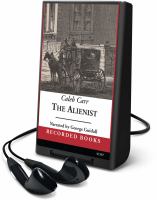 The year is 1896, and a serial killer is loose in New York City. His targets are poor young boys working as transvestite prostitutes. While the general public has little interest in the victims, Chief of Police Theodore Roosevelt wants the murderer stopped. He assembles a clandestine group of amateur detectives to track the killer.