The book of gutsy women : favorite stories of courage and resilience 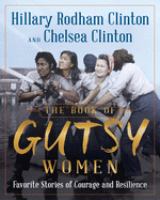