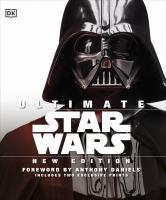 Because numerous aliens, droids, starships, weapons and locations are never identified on screen, it can be quite a challenge for fans to learn more about specific subjects. This unique compendium features a wealth of images and information about many characters, creatures, vehicles, devices, and locates. Each is presented in chronological order according to its first appearance in the Star War movies, The Clone Wars, Rebels, Resistance, and other official lore. -- Adapted from Introduction.