The bravest man in the world 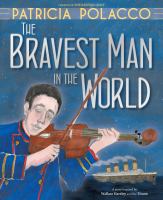 In 1912, orphaned Irish street musician Jonathan Harker accidentally stows away on the Titanic, where he is befriended by Wallace Hartley, called "the bravest man in the world" for playing violin with the band as the Titanic sank. Includes historical note.