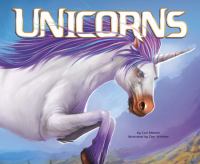 Book
Listen! Do you hear the clomping of hooves upon the forest floor? A flash of white bursts from behind a tree. A long horn shines like a crown upon the creature's head. It's a unicorn! Ever wondered about the magical powers of the unicorn's horn? Where does a unicorn live? What does it eat? Wonder no more! Striking illustrations and matter-of-fact text take you on a magical journey to learn all about unicorns.