Diana : Roman goddess of the hunt 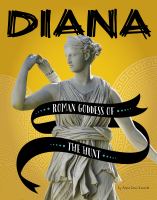 Roman goddess of the hunt.

"The hunt is on! This empowering and engaging narrative tells the legend of the fierce Roman goddess Diana. This divine huntress was also the goddess of the moon and could talk to animals. Hear the compelling myths of Diana's powers and learn where she fits within a family of gods. Additional facts explore Diana's role as protector in Ancient Roman and Greek culture and how the goddess's influence appears in popular culture today."--Amazon.com.