Suffragette : the battle for equality 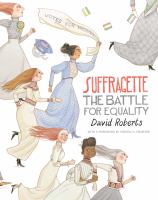 A New York Times best-selling illustrator turns his talents to a lavish history of the women’s suffrage movement in the U.K. and the U.S. just in time for the hundredth anniversary of the Nineteenth Amendment.