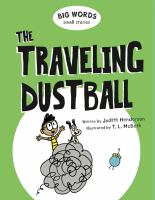 Book
"This second book in the Big Words Small Stories series follows the adventures of a boy named Davey and his dog, Abigail, as they travel the world on a floating dustball. Although Abigail finds travel IRKSOME and far prefers to stay at home LOLLYGAGGING, even she has admit that the dustball is an impressive PHENOMENON. As in the first book, the two are visited along the way by the Sprinkle Fairy, who owns a word factory in Sicily, "where the best words in the world come from," and her helpers, the Sprinklers, who have slipped one big word into each of the five small stories. The Sprinklers give readers a warning before each big word appears, and the pronunciation and definition after."--