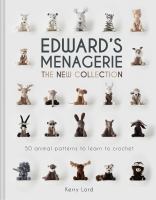 Book
"Fans of Kerry Lord's popular Edward's Menagerie series will rejoice in these 50 new crochet patterns for spectacular animals from around the world. From familiar favorites, such as the kangaroo and snow leopard, to more exotic critters, including the echidna and Malaysian tapir, this fresh collection of irresistible crochet patterns features an amazing collection of creatures. As in her previous books, Kerry Lord includes charming biographies for each animal companion, and her finished pieces are sure to melt hearts. With projects divided into three difficulty levels -- including Erica the Camel and Steve the Tapir (One); James the Meerkat and Hannah the Mouse (Two); and Gabriel the Baboon and Aurora the Arctic Fox (Three) -- every crocheter will find ideas to enjoy and complete. Those new to the craft will also find guidance on essential techniques with helpful tutorials" --