One is a lot (except when it's not) 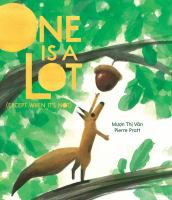 Book
"2 is a little. 0 is nothing. 1 is not enough. Right? But think again. One sun is a lot. One tree is a lot. One dog is a lot. Sometimes two is too much, and sometimes zero is just right. One Is a Lot is a unique and thoughtful picture book that introduces readers to a different way of appreciating numbers, asking them to reconsider their notions of the smallest numbers - 0, 1 and 2. A lyrical, philosophical book that shows readers how the value of numbers depends on perspective."--