Junie B. Jones: jingle bells, Batman smells! (P.S. so does May.) 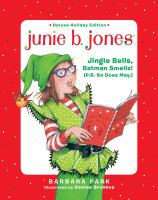 Junie B. Jones wishes that May would stop being such a tattletale, but when she is stuck as May's Secret Santa it becomes real trouble.