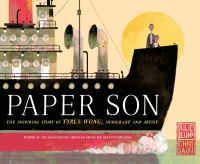 "An inspiring picture-book biography of animator Tyrus Wong, the Chinese American immigrant responsible for bringing Disney's Bambi to life. Before he became an artist named Tyrus Wong, he was a boy named Wong Geng Yeo. He traveled across a vast ocean from China to America with only a suitcase and a few papers. Not papers for drawing--which he loved to do--but immigration papers to start a new life. Once in America, Tyrus seized every opportunity to make art, eventually enrolling at an art institute in Los Angeles. Working as a janitor at night, his mop twirled like a paintbrush in his hands. Eventually, he was given the opportunity of a lifetime--and using sparse brushstrokes and soft watercolors, Tyrus created the iconic backgrounds of Bambi."--Amazon.com.