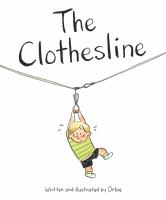 Book
"This is a story about a little boy who lives above a convenience store with his mom. When he goes to spend his pocket money on candy, he gives the knot on the clothesline a good yank (it makes the best sound). One day, he tugs a little too hard, and takes the stairs a little too fast, and--whiiiiiz!--gets stuck hanging smack in the middle of the clothesline. He cries for help, but Mom doesn't hear. He waits for someone to save him, but only a black cat slinks by. His arm gets tired--but if he hangs on with both hands, he'll risk dropping his coins! It's a true dilemma. Finally, he cries out so loudly that he tumbles to the ground. He still spends his pocket money on candy. But he NEVER touches the clothesline again. Told in sequential illustrations with simple text and vibrant sound effects, this is a suspenseful narrative offering an accessible entry point to early graphic novels and a lighthearted, laugh-out-loud reminder of the consequences of our choices."--