The hippo at the end of the hall 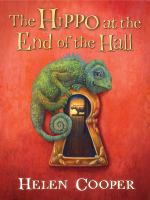 One morning, Ben finds an envelope containing a very special invitation to come and see the Gee Museum -- a dusty old place under threat of closure. However, once inside he discovers all sorts of incredible things like talking owls, dancing bees, magical bottles, witches, and of course, a hippo at the end of the hall. But most importantly he discovers a connection to his father and the family he never even knew he had. And now he has something important to fight for -- the survival of the Gee Museum and the promise of finding out who he really is.