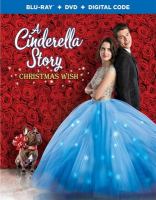 Blu-ray
Scheduled release date: October 29, 2019.
Kat Decker could use a Christmas miracle! The aspiring singer-songwriter has big dreams and bigger problems. Her vain stepmother forces her to be a singing elf at billionaire Terrence Wintergarden₂s Santa Land, but the job has one bright spot: Nick, the handsome new Santa. As the Wintergarden Christmas Gala approaches, Kat₂s stepmother and stepsisters are determined to keep her from going. Could an attentive dog, a BFF and a sprinkling of holiday magic help turn things around?