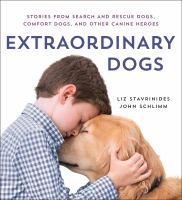 "A beautiful photo book showcasing more than 50 heroic dogs "in uniform" and their stories, from photographer Liz Stavrinides and author John Schlimm. Extraordinary Dogs portrays more than fifty working dogs, along with the police officers, firefighters, veterans, and other trained volunteer handlers who serve side-by-side with them. Their moving stories and beautiful photographs are an unprecedented glimpse at Comfort Dogs and Search and Rescue Dogs, along with bomb-detecting TSA dogs and canine ambassadors from across the United States. * The stories of the Lutheran Church Charities K-9 Comfort Dogs take readers behind the scenes of their headlining deployments-such as the Boston Marathon bombing, Superstorm Sandy, and the mass shooting at Marjory Stoneman Douglas High School. * Search and Rescue K-9 teams reveal what it's really like to travel into the eye of natural disasters, accidents, crime scenes, and the worst terrorist strike in recorded history. * At Washington Dulles International Airport, readers meet several of the Department of Homeland Security's TSA dogs whose sole job it is to keep the flying public safe from explosives and other dangers. Extraordinary Dogs is both a portrait of what love, hope, courage, and heroism look like in their purest forms and a tribute to the eternal and impactful bonds we forge with our furry friends"--