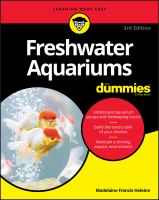 Inside, you ll find basic information to start your own freshwater aquarium, purchase and maintain healthy fish and plants, and find tips and tricks on how to introduce new fish and systems into your aquatic family. Perfect for beginner hobbyists and longtime aquarium enthusiasts alike, Freshwater Aquariums For Dummies makes it easier than ever to set up and take care of a freshwater aquarium and the fish within it.