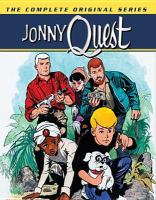 Blu-ray
TV's first animated action-adventure series is about to take viewers on a breathless ride. All 26 episodes charting the fantastic exploits of brave and brainy 11-year-old Jonathan Quest. Unlike the outrageous fantasy plots of cartoons that preceded it, Jonny Quest drew on science and detective-style logic to solve mysteries and apprehend sophisticated villains.