A fox found a box 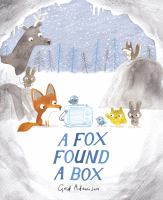 When a little fox finds a radio, he shares the songs and music with his animal friends, but after it goes quiet, the little fox begins to hear the music found in nature.