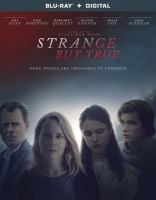 Blu-ray
A family is caught in a web of lies, fears, and suspense after the ex-girlfriend of their deceased son appears five years after his death and tells them she is carrying his child.