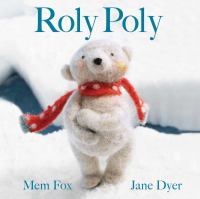 Roly Poly the polar bear never wanted a brother, but then little Monty arrives and Roly Poly has to adjust to his new sibling.