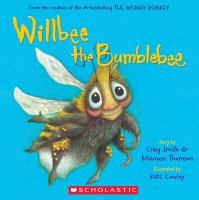 Book
Originally written as a children's song, Willbee the bumblebee is embarrassed (and chilly) when his snazzy black-and-yellow jersey gets caught on a rose thorn and unravels--but Monica the butterfly and Steve the spider come to his rescue.