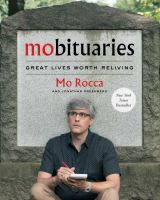 Book
"Mo Rocca has always loved obituaries--reading about the remarkable lives of world leaders, captains of industry, innovators and artists. But not every notable life has gotten the send-off it deserves. With Mobituaries--the book companion to the CBS podcast of the same name--the journalist, humorist, and history buff is righting that wrong, profiling the people who have long fascinated him--from the 20th century's greatest entertainer ... to sitcom characters gone all too soon ... to a shamefully forgotten Founding Father. Even if you know the names, you've never understood why they matter ... until now. In these pages, Rocca chronicles the stories of the people who made a difference, but whose lives--for some reason or another--were never truly examined"--