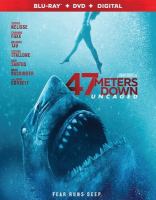 Blu-ray
Scheduled release date: November 12, 2019.
Four teen girls diving in a ruined underwater city quickly find themselves in a watery hell as their fun outing turns into heart-stopping fear when they learn they are not alone in the submerged caves. As they swim deeper into the claustrophobic labyrinth of caves they enter the territory of the deadliest shark species in the ocean.