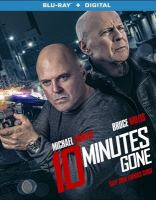 After a heist goes sideways, professional thief Frank Sullivan realizes he's lost 10 minutes of his memory, the result of a nasty whack on the head during the botched job. With his brother murdered and the ill-gotten gains missing, all Frank has to do is figure out which member of his team betrayed him while he avoids getting killed by Rex, his ruthless and wealthy employer.