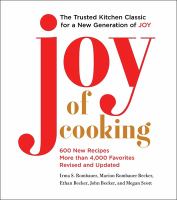 In the nearly ninety years since Irma S. Rombauer self-published the first three thousand copies of Joy of Cooking in 1931, it has become the kitchen bible, with more than 20 million copies in print. This new edition of Joy has been thoroughly revised and expanded by Irma’s great-grandson John Becker and his wife, Megan Scott.