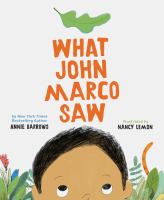 Book
Little John Marco is a keen observer of his world, but nobody--not his big brothers and sisters, not his parents, or his neighbors--listens to him; and only the fat orange cat in the front yard agrees with him that the tree in the yard is falling down.