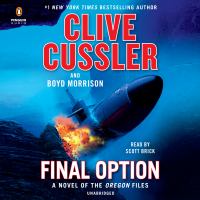 Juan Cabrillo and the crew of the Oregon are back with a new adventure in this thrilling suspense novel in Clive Cussler's number one New York Times best selling series. Juan Cabrillo and his team of expert operatives return in this latest entry in Clive Cussler's Oregon Files series. Aboard the Oregon, one of the most advanced spy ships ever built, they face new challenges and nemeses as they undertake another dangerous mission.