Saturday night at the dinosaur stomp 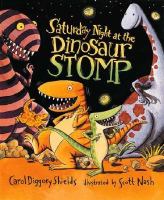 Book
When it's rock 'n' roll time during the prehistoric era, many different kinds of dinosaurs gather to twist, twirl, and tromp at a Saturday night party.