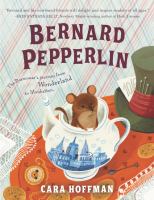 The drowsy Dormouse named Bernard Pepperlin of Lewis Carroll's Wonderland has been trapped in time subjected to an endless tea party with the Mad Hatter and others. One day a girl in a blue dress crashes the Hatter's tea party, the Dormouse feels more awake than he has in a long time. When the Hatter shoves him into a porcelian teapot painted with the New York City's skyline, he's thrilled to be transported to a maginficent new world where clocks are working. Soon he learns that the Pork Pie Gang of weasels is preparing to hold a concert that will stop time for the metropolis's residents. He must not--cannot--fall asleep as he is destined to save a magical world outside of Wonderland by foiling this nefarious plot. Bernard recruits the help of a streetwise cat, escaped pets living in Manhattan's underworld, and a troupe of cockroach musicians and tap dancers.