The girls : an all-American town, a predatory doctor, and the untold story of the gymnasts who brought him down 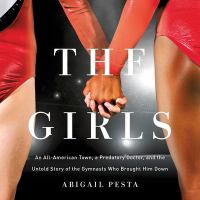 Larry Nassar has been called one of the worst sexual predators in history. For years, the families in Lansing, Michigan admired and trusted him. He was a longtime doctor at Michigan State University, while also serving as the physician for the U.S. Olympic gymnastics team. He became a mentor and confidante to aspiring young gymnasts with big dreams. In the wake of abuse revelations, athletes are asking why they weren't protected. Victims want to know why they weren't believed. Parents are questioning why authorities didn't stop him when they had the chance. How did this happen? And how can it be prevented from occurring again? Drawing on exclusive interviews, this book unveils the behind-the-scenes story on the scandal that riveted and devastated the world of elite sports, and the small community where it all began. This is the narrative of how these women found their voice and came together, refusing to let the abuse of their past define their future.