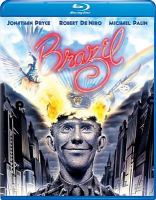 Blu-ray
In a future world, a daydreaming bureaucrat finds his life destroyed when he tries to correct an administrative error that caused a massive chain reaction of mistaken identity. Despite his efforts, he finds himself an enemy of the state and becomes involved with an underground superhero and a beautiful mysterious woman.