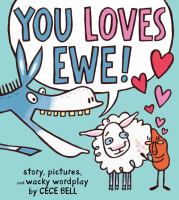 Book
Homonyms cause great confusion as an increasingly cranky yam tries to make introductions and provide explanations to a newly-arrived and rather silly donkey.