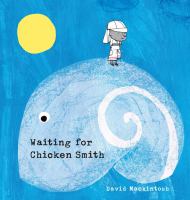 Every year a young boy stays in the same cabin at the beach with his family. And every year his friend Chicken Smith stays in the next cabin over. But this year, something's different: Chicken Smith hasn't shown up yet. A story about childhood friendships, anticipation, and the magic moments that arise while you're waiting for something else to happen.