Star Wars, the rise of Skywalker : the visual dictionary 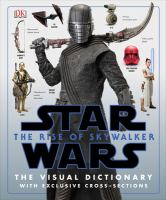 "An authoritative companion to the climactic final chapter in the new Star Wars trilogy, this essential visual guide to Star Wars: The Rise of Skywalker explores the world of Episode IX in unparalleled detail. Star Wars: The Rise of Skywalker: The Visual Dictionary features the fascinating characters, planets, vehicles, and aliens that the heroes of the Resistance will encounter in their battle to defeat the First Order. Produced in close collaboration with Lucasfilm, Star Wars: The Rise of Skywalker: The Visual Dictionary delves into the backgrounds of the new characters seen in the movie, as well as providing in-depth, updated character profiles of beloved Star Wars heroes, such as Rey, Poe, and Finn. The book also contains a handy visual recap of the events of Episodes VII and VIII, and stunning cross-section artworks of key vehicles!"--