Milton & Odie and the bigger-than-bigmouth bass 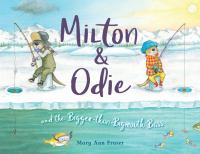 Book
Milton the pessimist and Odie the optimist are two otters living on opposite sides of a frozen lake, and neither one is having much luck at ice fishing--until they meet up and join forces.