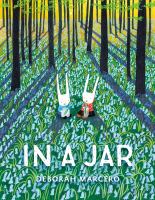 Book
When Llewellyn, a little rabbit who collects ordinary things in jars, meets a young girl named Evelyn, he joins with her to capture the extraordinary.