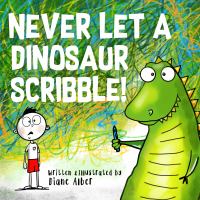 Book
"This story is about a little boy who keeps hearing, "Never let a dinosaur scribble!" But in his heart believes that people just don't understand how beautiful scribbling can be. He wonders what would happen if he just gave him one crayon to scribble with, and realizes that the dinosaur had other ideas in mind! The dinosaur ends up creating too much, creating a whole new set of problems. But with a little imagination makes an amazing story!"--Amazon.com