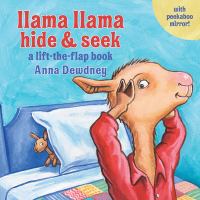 "Llama Llama can't find his fuzzy llama! Where could he be? Near the blocks? Behind the door? Beneath the bed?" --Back cover.