Millet and modern art : from Van Gogh to Dalí 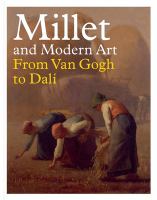 Book
An insightful overview of how Millet influenced and inspired many modernist artists that followed him. Jean-Francois Millet (1814-1875) was one of the most important artists of the Barbizon School. Through his publicly exhibited works and their critical reception, Millet was of crucial significance to modernist painters. Millet's modernity is evident in his varied subjects-from peasant themes to landscapes to nudes--and his anti-academic, rough paint application. He also produced highly inventive pastels and drawings. Jean-Francois Millet examines the international range of artists whom he influenced. For instance, Millet was an artistic hero for Vincent van Gogh, whose treatment of numerous motifs-including The Sower and Starry Night-was directly inspired by the older artist. Van Gogh even painted a remarkable series of 21 "copies" after Millet's work while living in the south of France in the final year of his life. Other artists on whom Millet had a profound impact include Camille Pissarro, Georges Seurat, Claude Monet, Edgar Degas, and Winslow Homer, and, in the 20th century, most notably Edvard Munch and Salvador Dali.