No more naps! : a story for when you're wide-awake and definitely not tired 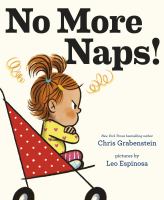 Book
It's time for a nap but, just like stubborn toddlers everywhere, Annalise Devin McFleece won't have anything to do with bedtime. Dad tries to encourage sleepiness by pushing her around the park in her stroller. Along the way, they pass a man sitting on a bench, dog walkers walking dogs, a boy on a skateboard, kids playing ball, a girl practicing her juggling, and others. Each of them thinks that taking a nap is a great idea and if Annalise Devin McFleece doesn't want hers, they'll happy take it. And one by one, everyone falls asleep...except Annalise Devin McFleece. But when she's finally ready for her nap, all the naps are taken! Is there anyone who has an extra nap to spare? With every turn of the page, the busy city scene becomes more and more quiet...except for Annalise Devin McFleece. Will she ever take a nap?--Publisher.