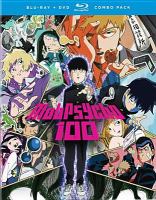 Blu-ray
Teenager Kageyama Shigeo, also known as Mob wants what all kids want--to be cool, so he relies on his mentor, the master psychic Reigen Arataka and his friends to help him navigate teenage life while using his extraordinary psychic powers to win out over an assortment of evil doers.