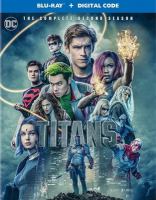 Blu-ray
Scheduled release date: March 3, 2020.
In season two, following the aftermath of their encounter with Trigon, Dick Grayson reforms the Titans. Under his supervision in their new home at Titans Tower, Rachel, Gar, and Jason Todd train together as a team. Although these original Titans attempt to transition into a regular life, when old enemies resurface everyone must come together to take care of unfinished business.