Queen of physics : how Wu Chien Shiung helped unlock the secrets of the atom 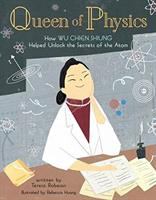 Book
"When Wu Chien Shiung was born in China 100 years ago, girls did not attend school. But her parents named their daughter "Courageous Hero" and encouraged her love of science. This biography follows Wu as she battles sexism at home and racism in the United States of America to become what Newsweek magazine called the "Queen of Physics" for her work on how atoms split"--