Me and white supremacy : combat racism, change the world, and become a good ancestor 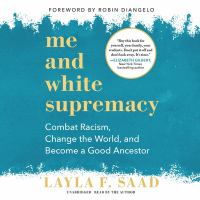 This book seeks to teach listeners how to dismantle the privilege within themselves, so that they can stop inflicting damage on people of color, and in turn, help other white people do better, too.