Salmon : a fish, the earth, and the history of their common fate 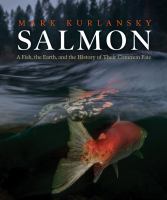 Book
A magnificent species whose survival is inextricably tied to the survival of the planet In what he calls "the most important environmental writing" in his long and award-winning career, best-selling author and journalist Mark Kurlansky recounts the sobering history of salmon and their perilous future. Kurlansky employs his signature multicentury storytelling and compelling attention to detail to chronicle the harrowing yet awe-inspiring life cycle of salmon and the long list of environmental problems, from habit loss to dams, from hatcheries to fish farms, from industrial pollution to the ravages of climate change, that threaten them. Kurlansky traveled extensively to observe those who both pursue and protect them in the Pacific and the Atlantic, in Japan, Russia, Ireland, Norway, and Iceland. The result is a global history of man's misdirected attempts to manipulate salmon and its environment for his own gain. These fish, uniquely connected to both marine and terrestrial ecology as well as fresh and salt water, are a remarkable natural barometer for the health of the planet. His overriding message is clear: "If salmon don't survive, there is little hope for the survival of the planet."--Publisher.